the Nashville Film Institute, we are surrounded by wonderful, supportive team of faculty and staff. Together, we seek to fulfill our mission:

“To train students for careers in the film industry.”

Micah Ellars has many years of experience in nearly every department and position there is in the film and commercial industry. He has produced commercials and corporate documentaries as well as the occasional music video. He also serves as an acting coach and has clients starring in Hollywood features. He is in pre-production on various feature projects.
In the classroom he has a unique approach. While Micah believes that a practical, hands-on education is the best way to pursue the technical skills of filmmaking, he thinks personal development is the most important ingredient for a successful life. He challenges the students to articulate their goals in writing and this approach has helped to launch several careers, even before some students have graduated.
Micah Ellars is a graduate of West Virginia State University with a degree in mass communications with an emphasis on film.
Phillip M. Lacy

An independent filmmaker for years, Phillip has been behind the scenes features films, television series and several commercials, promotional and educational videos. Often operating as a “One-Man Band”, having to write, direct, shoot and edit video for clients, this experience has been very rewarding and has accounted for quick decision making. Phillip has taught cinematography, lighting, editing, directing, animation, screenwriting and film production at the University of Miami as well as colleges in Nashville, Louisville, and Southern Indiana. Phillip loves living in Watertown, TN with his wife, Kim and their two dogs, Pepper and Willy.

B.S.C. and M.F.A. in Motion Picture Production from the University of Miami, Coral Gables, FL.

“The first quality of a Director is to see.” – Michelangelo Antonioni 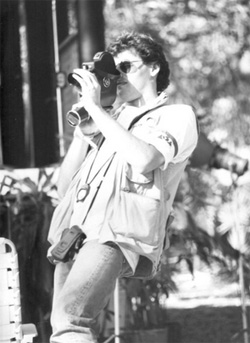 Once you begin, you will never stop learning about film, it is a language that is ever changing, ever growing, and once you think you know it all, the industry will just go on by you. It is your job to make the most of your opportunities at school with your instructors and your collegues and never forget that actions speak louder than words.

First, you must learn and master all the rules, then you should creatively break them.
Aravind Kamalanathan

“Nothing lasts Forever… not even your problems”. – Charlie Chaplin

Piece of advice for students:

Mr. Cibelli has spent a career editing feature films, television series, music videos, documentaries and web-based content. After attending film school at California State University, Northridge, Chris began working on the first season of the revolutionary editorial and musically styled series “Miami Vice” for Universal Studios.
Moving into the feature films, he began a long-term mentorship with Academy Award winning editor Anne V. Coates (Lawrence of Arabia, The Elephant Man) on features What About Bob?, Masters of the Universe, and Congo, where he coordinated complex visual effects with Industrial Light and Magic in 65MM. He went on to edit and supervise the music on Just the Ticket and later Andy Garcia’s The Lost City with Bill Murray and Dustin Hoffman.Chris produced several behind the scene documentaries for these films, working with Mariah Carey, David Anspaugh, Joe Mantegna, and collaborated with Andy Garcia on the PBS Master Series Award winning documentary Uno Mas: Cachao the story Israel Lopez, the master of Cuban classical music. He worked with such filmmaking luminaries as Francis Ford Coppola, Jerry Bruckheimer, Frank Marshall, Kathleen Kennedy, Richard Donner, Michael Mann, Danny DeVito and Dino DeLaurentiis. This work experience has taken him on many film locations as well as residencies at major studio backlots, including: Universal, Warner Bros., Paramount, Sony, MGM, and Disney. Recently he finished a feature film Infamous 6 editing in China for several months. Prior, he edited 2 episodes of NBC’s The Enemy Within, a season of Reverie for NBC/Amblin at Universal Studios, a prior season of Suits for USA, the award-winning series Rectify for the Sundance Channel, and spent seven years on the CBS worldwide television hit series The Mentalist from Bruno Heller for Warner Bros. Chris is a member in the Television Academy of Arts and Sciences, ASCAP, BMI, and alumni of California State University, Northridge (CSUN).Christopher Cibelli on IMDB
Adam G. Simon​

Adam G. Simon is a Los Angeles born actor and writer for television and film. He is known for his work as the writer of POINT BLANK (2019) an action thriller for Gaumont Films, Warparty, and Netflix, based on Fred Cavaye’s Action Thriller, “A Bout Portant”. The film was directed by Joe Lynch and stars Anthony Mackie, Frank Grillo, Marcia Gay Harden, Teyonah Paris & Boris McGiver.
Adam also penned the original screenplay for MAN DOWN (2015) an action thriller directed by Dito Montiel which stars Shia LaBeouf, Gary Oldman, Jai Courtney, Kate Mara & Clifton Collins Jr. In 2017 Adam and Filmmaker Joe Carnahan co-wrote a re-imagining of the popular cult film THE RAID by Gareth Evans. Prior to his current work, Adam started his professional career acting while working as a bodyguard and protection specialist. In 2012 Adam went to work as a Sales Producer for Cameron/Pace Group LLC in Burbank California (founded by director James Cameron and cinematographer Vince Pace). Shortly thereafter, he wrote and produced Synapse, a film where he also played the lead.Adam is an advocate for the homeless having being homeless himself while writing MAN DOWN and speaks as an advocate for homeless veterans and survivors of abuse.Adam G. Simon on IMDB
Doug DeAngelis

After twelve years in the record industry, he relocated to Los Angeles and shifted his focus to film and television music. He is a BMI Award winning composer and music supervisor, whose credits include top rated primetime network dramas, comedies, feature films, reality TV, awards shows, sports themes, and talk shows.

Royal Academy of Dramatic Art in London. Honors Diploma and The Ronson , Vanbrugh and Patrick Crean prizes. Best Actor Award at the Barcelona Film Festival. Vincent has successfully pursued a career in acting, directing, writing and has an extensive career as an acting teacher, spanning 36 years in three different countries; England, U.S.A and Italy.
He has worked as an actor with many esteemed movie directors ranging from Ron Howard, Paul Haggis, Christopher Nolan and Peter Greenaway , Zack Sneider, Jose Padilha, Bille August and most recently filmed The Pope with Anthony Hopkins and Jonathan Pryce directed by Fernando Mereilles and he has just returned from Belgrade where he played the role of the celebrated Italian Scientist , Luigi Crocco in the Bollywood Film ‘Rocketry, The Nambi Effect’ about the Indian Scientific genius, Nambi Narayanan, directed by and starring Madhavan ( Maddy ), and the Indian superstar, Shah Rukh Khan. Among some of the wonderful actors he has worked with are;, Tom Hanks, Hilary Swank, Chris Hemsworth, Helena Bonham Carter, Daniel Day Lewis and Penelope Cruz, Diane Lane, Mila Kunis, Nicholas Cage, Antonio Banderas, Sofia Loren, Susan Sarandon, James Mason.
His TV career stretches from work on the BBC and ITV in the UK, RAI and MEDIASET in ITALY to Netflix and HBO in the USA. Most recently the HALLMARK remake of the classic Audrey Hepburn movie, Roman Holiday, renamed Rome in Love. As an acting teacher, he founded the Hollywood Blvd Acting School in Hollywood, California where he was artistic director for four years.

A full biography is available on IMDB.COM.

WE ARE NASHVILLE'S FILM SCHOOL​

OUR MISSION: "TO TRAIN STUDENTS FOR CAREERS IN THE FILM INDUSTRY"​